Digital Humanities & Cultural Heritage (Greek)
The World Wide Web has changed the way people search and discover information that gives them the opportunity to access millions of documents instantly. Electronic repositories, libraries, archives facilitate access to original and rare documents. The new challenge is to overcome traditional data management and information browsing barriers and enable online searches for things, not strings.
In order to achieve this, computers have to ‘understand’ the world somewhat like humans do. Unlike string-based searches and probability-based methods of information retrieval, Knowledge Graphs (KG) provide computers with structured data across a range of interlinked online resources. In this way, data have added value, as they are no longer stored in silos, but become part of graph databases openly accessible online. For example, a Knowledge graph permits to represent explicitly the information related to Da Vinci as nodes linked by types of relationships. In this way, all the nodes associated to Leonardo Vinci, e.g. his paintings, his birthplace etc., are more easily retrievable. 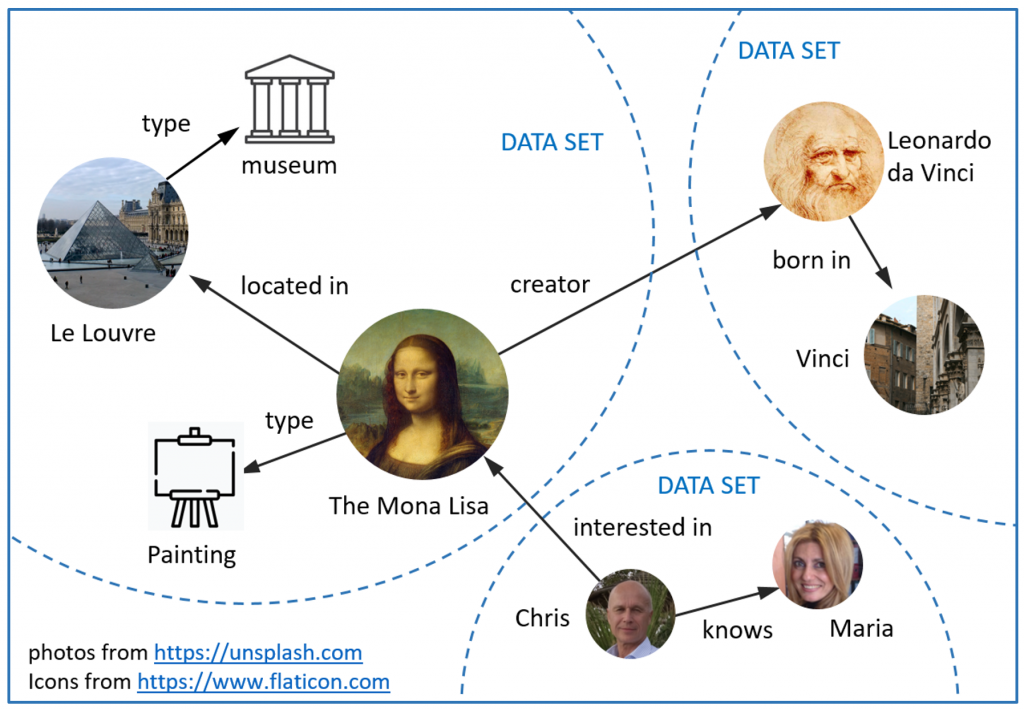 Ontologies are kinds of Knowledge Graphs that are built in order to describe areas of knowledge promoting interoperability and seamless continuity across different online sources. Ontologies are Semantic Web (SW) technologies.
« The Semantic Web is not a separate Web but an extension of the current one, in which information is given well-defined meaning, better enabling computers and people to work in cooperation » Berners-Lee, T., Hendler, J., Lassila, O.: The semantic web. Scientific American Magazine, pp. 29–37, 2001.
The idea behind the Semantic Web is that while information in digital form may be accessible online, its importance remains incomprehensible and unprocessed by search engines. Computers can easily detect search words, but they do not understand the context in which these appear. The vision of the Semantic Web is that the web (as it is now) will be transformed from a collection of documents understood only by humans into a global knowledge base, in which computers will process information based on official semantic data models. Ontologies form the basis of the Semantic Web and will help realize the vision of more effective retrieval of the information sought by users of the World Wide Web, which is constantly becoming larger and more chaotic (at least 5.59 billion indexed web pages as of 22 July 2020).
Thanks to the WWW Consortium (W3C), a number of open standards / languages have been developed, in order to pave the way for the Semantic Web. Among the most important ones are: Extensible Markup Language (XML), Resource Description Framework (RDF), Web Ontology Language (OWL) and SPARQL Query Language for RDF (SPARQL).
Attribution-ShareAlike 4.0 International (CC BY-SA 4.0)

Welcome to WordPress. This is your first post. Edit or delete it, then start writing!